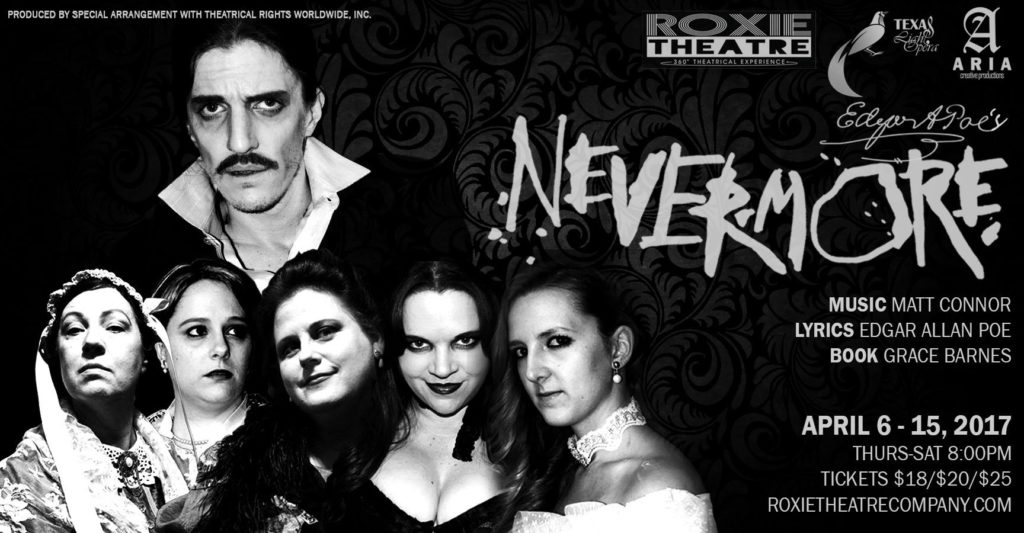 Take a dark and mysterious journey into the life of Edgar Allan Poe. This imaginative musical uses Poe’s poetry and short stories as its base and his shifting obsession with the women in his life as its catalyst. With hauntingly beautiful melodies, “Nevermore” breathes new life into Poe’s work and explores a twisted true-life tale that is as bizarre as his classic stories of the macabre. Aria Creative Productions and Texas Light Opera in association with the Roxie Theatre, will present “Edgar Allan Poe’s NEVERMORE,” a bio-drama on the master of macabre himself. This musical is a dark and romantic portrayal of Poe’s life, told thru a series of dream-like vignettes that take the audience on a whirlwind thru his life, as well as presents ten of his most brilliant poems as musical numbers, including “Evening Star,” “Annabelle Lee,” and “The Raven.” This production will be the Texas premiere of this musical. The cast includes Catie Carlisle, Morgan Clyde, Nicole Erwin, Erin Polewski, and Sharon Newhardt. Joseph Urick plays Edgar, as well as directs.

Edgar Allan Poe (1809-1849) was an early Romantic American writer best known for his dark poetry and chilling short stories. He is one of America’s literary pioneers, as he popularized the short story, and is often credited to pioneering the detective genre, which even Sir Arthur Conan Doyle drew inspiration from for his iconic Sherlock Holmes tales. Most importantly, Poe was the first established American writer who tried to earn his livelihood through his writing alone, which resulted in crippling financial difficulties, and a tumultuous career as an editor and critic.

The production is featured at the Roxie Theatre, which offers a unique 360<sup>o</sup> experience for its audience. “We want the audience to experience something very new,” says TLO Executive Director, Nicole Erwin, “and having this kind of non-traditional musical told on a traditional proscenium stage simply would not have worked for us. The beauty of the Roxie is in its malleability, giving us opportunities for new and exciting staging. This means you’ll be seeing actors not only in front of the audience, but up in the rafters, intermingling in the aisles – really inviting the audience into this weird, twisted world of Edgar Poe.”

“The musical is not a biography,” Urick said, “it is a romantic memory, so it’s incredibly biased, as we only see the story thru Edgar’s eyes; but it is the women who haunt him that remind him and us that his life is not quite as we would like to see it. And that, to me, is what is most important about this piece. It allows us to humanize this literary icon and us understand why he wrote the way he did.”

While the play is about Edgar’s life, it is the women who are the most prominent feature. The ladies of this cast include Catie Carlisle as Virginia. Catie has been seen most recently in productions around San Antonio including “Locolobo” at the Overtime, and “Born Yesterday” at the Classic. The Whore is played by Morgan Clyde, who has won ATAC Awards for her performance of Katherine in “Taming of the Shrew” (Classic Theatre), and her fight choreography for “Born Yesterday.”  As Edgar’s young sweetheart Elmira, Erin Polewski joins the cast after having played Rose in “The Secret Garden” at the Emily Ann Theatre in Wimberley, TX and Rachel Brown in “Inherit the Wind” at the Circle Arts Theatre in New Braunfels. TLO Executive Director, Nicole Erwin portrays Elizabeth Poe, Edgar’s Mother.  Nicole has been featured on many San Antonio stages, and most recently portrayed Claire Holmes in “The Secret Garden” and The Wardrobe in “Disney’s Beauty and the Beast,” at The Playhouse San Antonio. The role of Muddy (Maria Clemm) will be played by Sharon Newhardt whose recent credits include “Joseph and the Amazing Technicolor Dreamcoat” and “Mary Poppins” at The Woodlawn Theatre. Lastly, Rebecca Trinidad returns to the theater scene as the show’s Co-Director after overcoming her battle with cancer. Rebecca is the creator and driving force behind “Broadway Nights” at The Woodlawn Theater. Notable performances include “Funny Girl” at The Playhouse San Antonio and Jack’s Mother in “Into the Woods” at The Woodlawn Theater. She also recently directed the highly acclaimed “Memphis” at The Woodlawn Theatre.

This production is not recommended young children, and contains mature situations. The running time is 2 hours and 15 minutes with intermission. Music Direction is by Darrin Newhardt, Set Design by Jonathan Pennington, Lighting Design by Tim Kelleher, Costume design by Rose Kennedy and Sound Design is by Charles Drew.