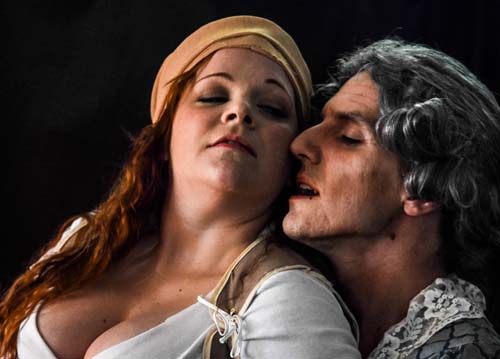 ARIA Creative Productions asks “What is Art?” with controversial show about the Marquis de Sade at the Overtime Theater

“In order to know virtue, we must first acquaint ourselves with vice.” One of the many memorable quotes from the infamous libertine and author, Donatien Alphonse François, otherwise known as the Marquis de Sade. The Marquis, to say the least, is a historically polarizing figure historically who spent the better part of his adult life in prisons and mental asylums throughout France due to his penchant for writing macabre stories fraught with pornography, violence, and some of the most extreme aspects of human behavior. His legacy is so profound, that even the words “sadism: and “sadist” are derived from his surname.

In 1995, Texas-born playwright Doug Wright took pen to paper and composed his own story about this tumultuous character. Quills premiered at the Woolly Mammoth Theatre in Washington, D.C. and went on to win an Obie Award, as well as be adapted by Wright himself into a full-length motion picture starring Geoffrey Rush, Kate Winslet and Michael Caine. The film was critically acclaimed, earning Rush a BAFTA, a Golden Globe Award, and an Academy Award nomination for his performance as the Marquis.

Quills will be the first stand-alone production for ARIA in 2018. ARIA co-produced the regional tour of The Last 5 Years with Texas Light Opera earlier this year. It was during that production ARIA Executive Director Nicole Erwin was given the script and immediately became intrigued by its message.

“We want to show San Antonio something provocative, not just emotionally, but physically and mentally, as well,” says director Nicole Erwin. “This show, much like the author it’s written about, is as controversial as it gets. Within the first few minutes, the audience will be thrown eloquently written pieces of literature, featuring some of truly perverse scenarios: rape, murder and coprophagia, just to name a few. While we look at such things as atrocious, and justly so, one only has to look at our modern culture and ask, , ‘How deplorable do we really consider these things?’”

It was during The Last 5 Years that Erwin and ARIA Artist-in-Residence Joseph Urick began to brainstorm the possibility of putting on such a production. “The chance to bring its source material to life is staggering, but incredibly exciting as well. It is our hope that the show will be both terrifying and wonderful to watch,” says Urick.

The production is full of material pulled directly from Sade’s work, and, as expected, is not for all audiences. “At its heart,” continues Urick, “beyond the sex and the erotica, the story is not about the quality of Sade’s work, rather, it directly asks the audience, ‘What is art?’ ‘Is there a difference between good and bad art?’ ‘Should art ever be censored?’ ‘Who makes the decision to censor it?’ And, most importantly, ‘What gives them to right to make such a decision?’”

The show features a hyper-fictionalized re-telling of the Marquis’ final days at Charenton, a mental asylum in France where the historical Marquis actually did live and die. “Bringing the asylum to life at the Overtime is going to be quite a challenge,” says Erwin.  “We are in the small theatre that seats just over twenty-five seats, so spacing is going to be limited. However, in such an intimate space, we really want to put the action in the audience’s laps, so, in the tradition of the French neo-classic period, we are going to present this show in the French Tennis Court style, with the audience on two sides.”

“But what makes the show daunting is the extreme subject matter,” continues Erwin, “It would be quite easy to censor some of the more controversial moments of the play, but, if we did, when the play itself is about the lengths some go to censor art, then why do the show at all? So, yes, this production will pull no punches and will feature all those salacious details the Marquis was notorious for. It is my hope that the discerning audience will, at least, have lots of food for thought afterward.”

Quills will feature a cast of six, including Michael Song as Dr. Royer-Collard, a staunchly moral man of seemingly impeccable character; Robert Moritz as the Abbe de Coulmier, a merciful priest whose soft heart and merciful devotion are put to the test; Morgan Clyde as the chambermaid Madeleine Leclerc, a laundry lass smitten with the Marquis’ works; James Lindsley as Monsieur Prouix, an architect who works for Dr. Royer-Collard, Susan Brogdon as Renee Pelagie, the Marquis’ ill-begotten wife, who is desperate to silence her philandering husband, by any means; and finally, Urick will play the insufferably impish Marquis. 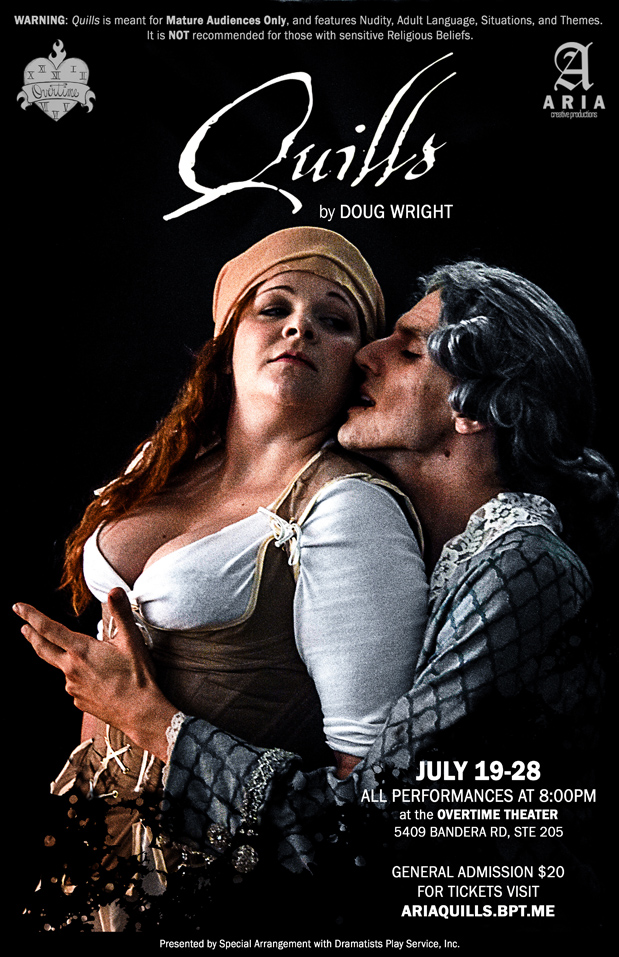 Due to its graphic adult content, intense subject matter, and provocative language and situations, this production will be held for a limited run, with only four public performances, and one preview.

Quills is meant for mature audiences only, and will feature male nudity, Adult language, situations, and themes. Only those over 18 will be admitted. No exceptions. This production is not recommended for those with sensitive religious beliefs.

Runtime: Two Hours. One Intermission. Reviewers are invited on or after July 18. Photos Courtesy of Mary Rath.